Well here are, its February 1st and I’m just now getting around to write about my experiences at the San Diego Brewers Guild Festival that took place on November 3rd. Better late than never, that’s what I say! Of course it was a warm sunny day and the location, Broadway Pier, was a great choice to show case some of the worlds greatest craft beer and our great city. 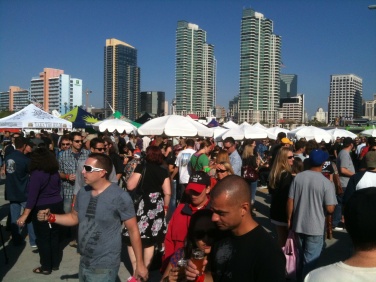 As I stood at the end of the pier watching Stars and Stripes, the America’s Cup winner sailing around the bay I remember thinking what a great time it is to be alive and living in San Diego. Here I was, dressed in a tee shirt, shorts, and flip flops in November, in the shadow of the USS Midway with naval aircraft flying overhead sipping a beer. I missed the golden ages of Hollywood, rock and roll, and muscle cars but one day people are going to look back on this time and call this the golden age of the beer movement. The highlight of my day was being served a beer by our then Mayor Jerry Sanders. How cool is that? Hopefully our new Mayor will follow suit and support the industry as much as Mayor Sanders did. 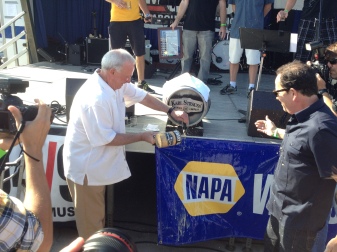 Because IPAs dominate the offerings in our region I began a quest this summer to figure out which IPA I like the best. My brother-in-law Richard and I often trek across the county sampling the latest offerings from the breweries and I always make it a point to check out the IPAs. This can be a daunting task because IPAs tend to have a lingering bitter finish and I am not a huge fan of bitterness. Sometimes too much of a good thing is too much. I prefer the more floral and citrus notes that certain hops can impart into a brew. Some of the top contenders were from Green Flash, Ale Smith, and Stone.

Even though these are great IPAs, none of them jumped out at me and said “this is it, this is the one!” and to be honest, because I tasted so many IPAs over the past few months I kind of lost track of which ones I liked better. So, when Richard and I went to the San Diego Brewers Guild Festival my personal mission was to once and for all figure out which IPA I liked the best. I made my way through all the booths skipping the ones that I had tasted before that did not appeal to my taste. After carefully scrutinizing many samples I was finally able to narrow down my choices to just two breweries, Iron Fist Brewing Company and the new kid on the block, Societe Brewing Company.

With a handful of punches left on my card I alternated back and fourth between the two booths which were conveniently located next to each other. This gave me the opportunity to do several back to back tastings and really concentrate on what I liked the best about each offering. I had it narrowed down to three IPAs: Nelson The Impaler from Iron Fist, The Pupil, and The Apprentice, both from Societe. After much deliberation I chose Societe over Iron Fist. All three IPAs had the qualities I look for in an IPA: floral nose, citrus taste, and a hint of bitterness in the finish. Now I had to decide which IPA from Societe I liked better, The Pupil or The Apprentice. I began talking with Tyler Tucker, Assistant Brewer with Societe. Tyler explained to me that the reason why The Pupil and The Apprentice had such strong citrus notes was because they brew these beers with a whole bunch of Nelson hops(hence the name choice for Iron Fist’s Nelson The Impaler). Tyler was even cool enough to give me his San Diego Brewers Guild Festival collectable glass from the event, thanks Tyler! Back to the IPA, after repeated back to back tastes of The Pupil and The Apprentice I chose The Pupil over The Apprentice by a narrow margin. To me The Pupil had a slightly more pleasant finish than The Apprentice.

Now here’s the kicker, I happen to be recently doing some work right around the corner from Societe so needless to say I stop in there quite often for a quick glass and growler fill but guess what? My tastes buds are continually evolving and now I think I like The Apprentice a little better! Oh well, it’s all part of the fun I guess.

By the way, if any of you readers have never been to a craft beer tasting event my advice is to get out there and start tasting! Even better, don’t wait for a big event to roll around. Plan a day trip to three or four breweries with a lunch stop in the middle. Please remember to be responsible, do tasters only, eat a large breakfast and lunch, and drink plenty of water in between stops. Cheers!

Posted on February 1, 2013, in Uncategorized. Bookmark the permalink. 1 Comment.