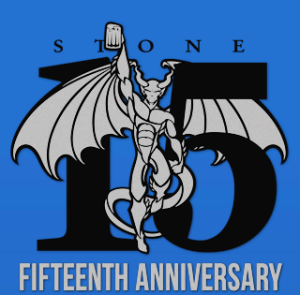 For all the talk about San Diego beer festivals and the mega-event that went bust, this is the one beer event this summer you can count on!  I’m talking about Stone Brewing Co.’s 15th Anniversary Celebration. Yes, today’s 21-year olds were probably entering the 1st grade when Stone got off the ground and started making San Diego County famous for hop-monsters like Arrogant Bastard Ale and Ruination IPA. Stone’s flagship IPA has been one of my top favorites for years now, and their really isn’t anything this brewery puts out that could be considered mediocre or catering to the lowest common denominator for the sake of easy sales. Nope, they did it their way….and they won!  Stone is now expanding in all directions: a new tasting room & bottle shop in the South Park neighborhood, taking over the operations of an organic produce farm, a new brewery and bistro in Liberty Station on the way, expansion of their Escondido brewing facilities, a planned hotel across the way for dizzy-headed beer tourists to stay at, and looking at a move into continental Europe of all places (whew…!!!) I’m tempted to say that Stone will soon be the largest craft brewer on the West Coast, and if I end up being wrong on that in the short term the margin of error will forgive me.

So anyway….on with the Stone 15th Anniversary Celebration! As in recent years, it’s being held on the campus of Cal State Univ. San Marcos. There’s two 3-hour sessions on Saturday, August 20th (11 AM – 2 PM, and 3 – 6 PM) for which tickets are still surprisingly available, and will set you back 40 bones plus a small service fee. For that, you get a commemorative tasting glass (which you can sell to me later if you don’t care!), 10 samples of beer (from not just Stone but a whole slew of over 40 guest breweries), free home-brewed sodas, samples of Mike’s beer cheese, and an all-around good time. But for my investment in this historic occasion, I’m dropping the $75+ for the Friday night brewers’ reception, which gets you all of the above but with unlimited tastings, a chance to meet and greet with the brewers, and complimentary gourmet fare from some of San Diego’s top foodie joints. Again—tickets are magically still available, but if you’re even remotely interested you had better get onto Stone’s website immediately and purchase will-call tix. And get one for your designated driver, too–they’ll thank you later.

Drop me a line if you’ll be going to this event. I’ll have some pictures and write-up to follow. If you can’t make it, pour yourself a hop-monster of a beer this weekend and do a little meditation and appreciation for the pioneering efforts of those who refused to sell out with fizzy yellow beer. Kind of a pre-Thanksgiving exercise, if you will.

Posted on August 18, 2011, in Breweries, Events. Bookmark the permalink. Leave a comment.